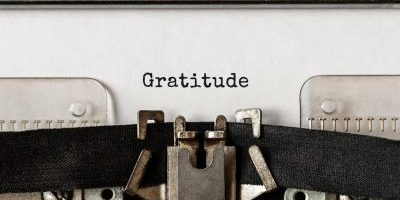 Think about the number of times an appreciative friend, colleague or subordinate offered thanks, and rather than respond with “you’re welcome,” the response is “oh, it was nothing,” or “don’t thank me, anyone would have done it.” Although an understandable response – out of embarrassment, perhaps – the comments can serve to minimize or trivialize the person offering the thanks. How might she or he feel?

Better yet, think about the times a compliment was paid, “wow, you really look good,” or “I’m sure you’ve lost weight, you look terrific,” and rather than reply with a simple show of gratitude, as in “thanks,” the response is “no I don’t, I look frightful today,” or “I wish I had lost some weight, in fact, I’m going in the other direction.” This may cause the recipient of the compliment to save face, or lessen his or her embarrassment at having been paid the compliment; however, it can cause the giver of the compliment – who likely went out on the limb to offer it – feel bad.

It’s important to see these compliments or displays of gratitude from the other’s point of view: In short, putting oneself in another’s shoes, high heels, moccasins, jack boots or flipflops, allows the receiver to express humility sincerely, succinctly and powerfully.

This is the eighth in a series of blogs offering communication tips for these turbulent times. The first focused on two key leadership skills: listening and asking, noting that many leaders are great at “telling,” and not as good at listening and asking. The second turned the spotlight on the importance of owning one’s communication by using the word “I” and banishing the word “you,” to almost nil. The third blog focused on how assumptions about what another means can get us into trouble. To coin a legal phrase, it challenged us to avoid “assuming facts not in evidence;” while the fourth blog targeted the importance of communicating with humility and compassion.

The fifth post in this series provided actionable tips to “make it easy for them to say yes,” or, how to communicate effectively to seek buy-in and approval from the decision-makers. The sixth blog reminded us of the power of positive feedback: Not just from the recipients’ point-of-view, but also for the giver. While the seventh challenged us to spread a little kindness through word and deed. Thus, the parallel to today’s topic.

Tips for Showing Gratitude Through Words and Deeds:

2) A simple, succinct and powerful “Thank You” works when someone has done something nice for you, or pays you a compliment.

3) When someone offers a “Thank You,” a simple, succinct and powerful “You’re Welcome,” does the trick.

In reflecting upon this blog, two experiences – in which I failed to act with humility and gratitude – leapt to mind, causing me to reflect on the how the others’ surely felt, and causing me to change my conduct.

Several years later, he invited me to lunch to offer his thanks. Rather than graciously accepting his gratitude, and acknowledging what a great job he had done and how difficult it was for him to thank me, instead I said, “oh, Charlie anyone would have given you that bonus. You deserved it.” The look on Charlie’s face said it all: it had indeed been difficult for him to offer the thanks, and rather than my recognizing that, I diminished his contribution.

What went wrong: I was thinking about me rather than Charlie. Instead of a simple and powerful “you’re welcome, what an exceptional job you did – well done you,” I was concerned that I would be perceived as praising myself for having given him the bonus. How wrong I was.

Tips for Showing Gratitude Through Words and Deeds:

2) A simple, succinct and powerful “Thank You” works when someone has done something nice for you, or pays you a compliment.

3) When someone offers a “Thank You,” a simple, succinct and powerful “you’re welcome,” does the trick.

Take a walk in someone else’s shoes, high heels, moccasins, jack boots or flipflops, and respond to a compliment or a “Thank You” by allowing yourself to express gratitude and humility sincerely, succinctly and powerfully.