Skip to content
011 322 44 568500 Beverly Boulevard Los Angeles, CA 90048
Mail page opens in new windowLinkedin page opens in new windowTwitter page opens in new window
“Diana Peterson-More is a true professional who quickly assessed our agency’s
needs and developed realistic and do-able plans for improving our organizational capacity. Without Diana’s help,
it would have taken us months to get close to what she accomplished in a few weeks.”
— CEO, California Government-Funded Nonprofit

Over the course of her long career, Diana Peterson-More has been a practicing employment lawyer, a corporate manager, director, executive officer, and a sought-after consultant and guest presenter. Throughout her varied career, she has been fascinated by what motivates herself and others to achieve results, to determine their own unique definitions of success, and then to facilitate a roadmap to get there.

As a young manager, Diana faced the dilemma many confront today. She was promoted because she was a great individual contributor with proven results, and quick on the uptake. Yet she was not trained nor exposed to the fundamentals of supervision and management, and was left to her own devices to figure it out.

Unhappy at first, and never one to quit (as the first lawyer promoted out of the Southern California Edison Company law department and the first female HR manager, all eyes were on her) Diana taught herself how to supervise, manage and lead – largely by making mistakes and learning from them. Those early days propelled her to self-examination, learning through expert advice, and the school of hard knocks. Along her journey, she received feedback that allowed her to grow from a “tell” boss to the empowering “asking and listening” boss she eventually became, and for whom many wanted to work. Her practice now is helping others learn from her mistakes and to achieve their own unique success. 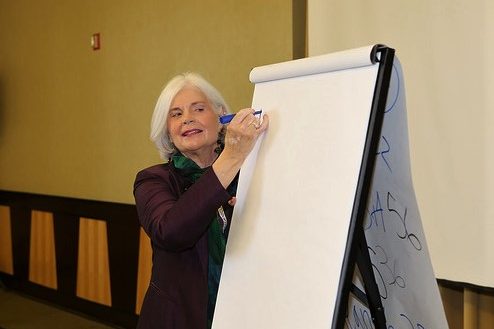 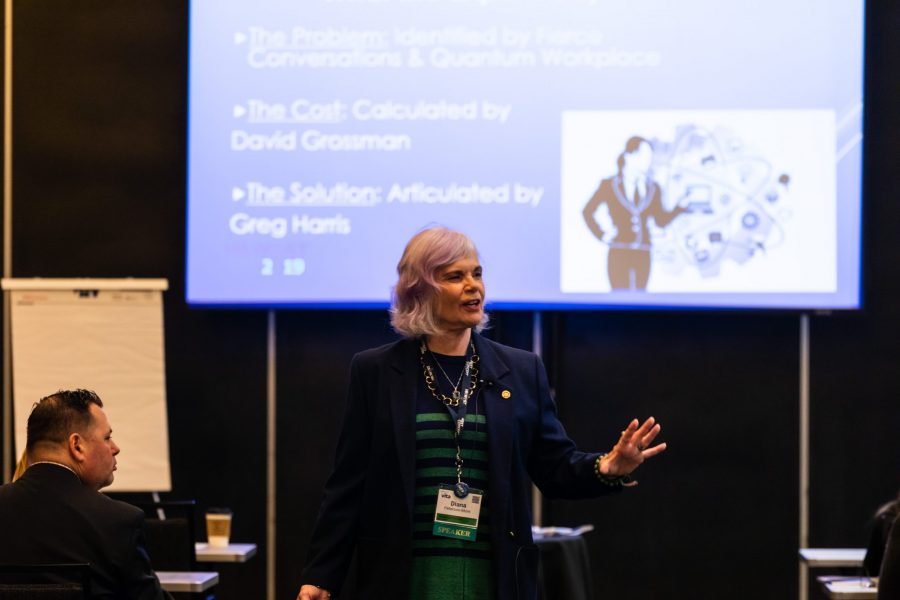 Diana has been a “first” in many of the positions she held. After graduating from Loyola Law School, Diana took a year off to care for her son who was born two months after graduation. When she entered the legal workforce, she went to work for a boutique employment firm. Within two years the firm split up, and Diana was recruited by Southern California Edison Company, which was bringing the labor law practice in-house.

Diana was the first to conduct an in-house labor arbitration – which she won – and was sought after by the in-house clients for advice and counsel. After two years on the job, she was both the first lawyer and first female promoted out of the law department, moving to an HR managerial position over the opportunities to manage a Steam Station or to lobby in front of the public utilities commission. Thereafter, Diana was promoted twice, and was elected Corporate Secretary of Southern California Edison Company and its holding company, SCECorp. She was the sole female officer in a cohort of 17 men. While Corporate Secretary, her third child was born. (Diana still holds the record as the only Edison officer ever to be pregnant while in office!)

After two years as Secretary, she was asked to take on the HR Director position at The Times Mirror Company, the parent company of 20+ media organizations comprised of newspapers, training companies, book companies, etc. Responsible for the full range of workforce policies and programs, her department included pay and performance management, employee relations, and all insured and qualified benefit programs. She spearheaded a company-wide human resources re-engineering project and a separate nationwide diversity task force, implemented a cutting-edge competency-based pay and performance management system, and oversaw standardization of benefit programs that covered over 25,000 employees and their dependents.

When she left Times Mirror, she turned down several senior HR executive officer positions in favor of starting the Organizational Effectiveness Group. Along the way, Diana received awards from the YWCA, the NAACP and the NWPC.

Diana grew up in a family where both parents were involved in service organizations and nonprofit boards. As the proverbial “chip off the old block,” she followed in their footsteps. Her first nonprofit involvement was a result of need: When she wanted to start her legal career, there were few childcare options. Diana found her way to the just-opened CalTech/JPL Child Educational Center, where her son was a “founding baby.” Diana was elected the Board Co-President, and the rest, as they say, is history.

Parallel to her working career, Diana has served as a community volunteer for governmental and nonprofit organizations. Government appointments include the Board of Supervisors’ Child Care Advisory Board; the Workforce Investment Board of Los Angeles; the Pasadena Planning Commission; Pasadena’s Board of Zoning Appeals; Pasadena’s Housing Affordability Task Force; and the Pasadena Unified School District’s Redistricting Task Force. Currently, she serves on California Assembly member Chris Holden’s, and Pasadena Council member Steve Madison’s Community Advisory Boards. 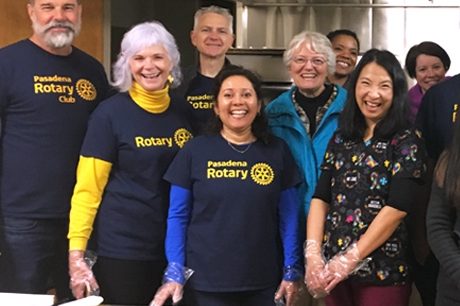 Additionally, Diana is Board Vice President of the Tournament of Roses Foundation, where she also chairs the Strategic Planning Task Force; she co-Chairs the Pasadena Rotary Program Committee and serves on the Union Station Homeless Services Personnel Committee. She is also a community advisor for Pasadena Media, the public access television station. Recent board memberships include board vice president, American Red Cross, Eastern Sierra Symphony, and Community First Initiatives. Past volunteer activities include President of the Rotary Club of Pasadena, and board officer for: AIDS Service Center, the Los Angeles Women’s Foundation, the Women’s Economic Development Corporation, the Alliance for Businesses and Childcare Development, and the YWCA of Pasadena, Foothills-Valley. Past board memberships include: Union Station Homeless Services, where she chaired Fund Development.

Diana has also chaired several special events and has been honored with the Pasadena NAACP’s Corporate Award, the YWCA of Pasadena, Foothill’s Public Service Award, and later, as a “Woman of Distinction,” and the NWPC’s Jeannette Rankin Courage Award. 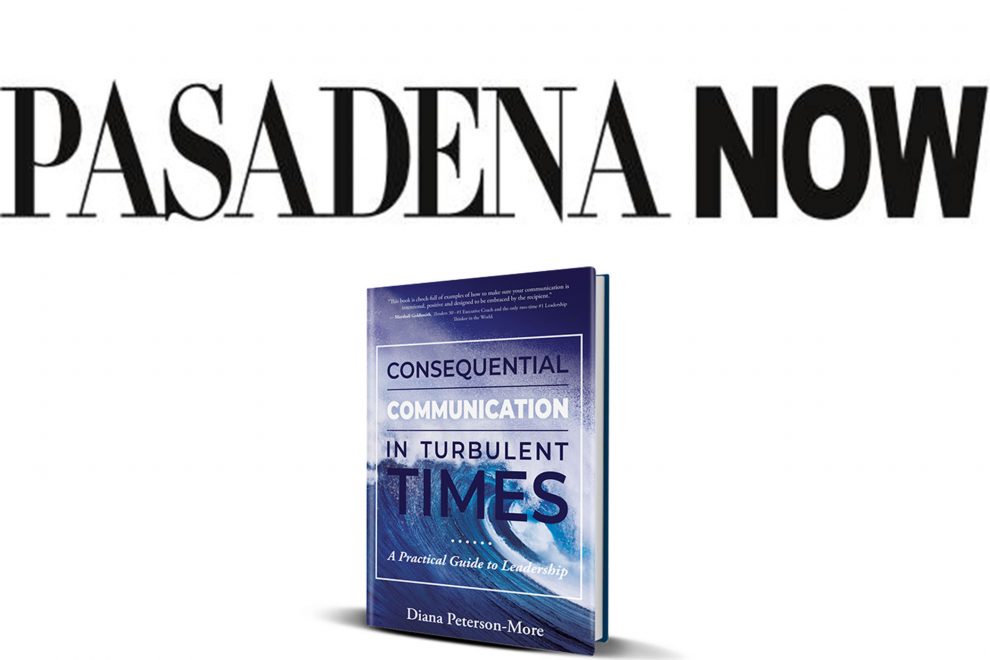 In some dramatic ways, local author Diana Peterson-More says the pandemic has affected workplace communication, a critical skill everyone needs to better understand, especially in the Digital Age 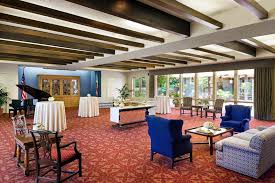 On Thursday, March 14th from 6:00 – 8:00 p.m., the University Club of Pasadena will host a business mixer, featuring local author, Diana Peterson-More, and her first book, Consequential Communication in Turbulent Times, a Practical Guide to Leadership. 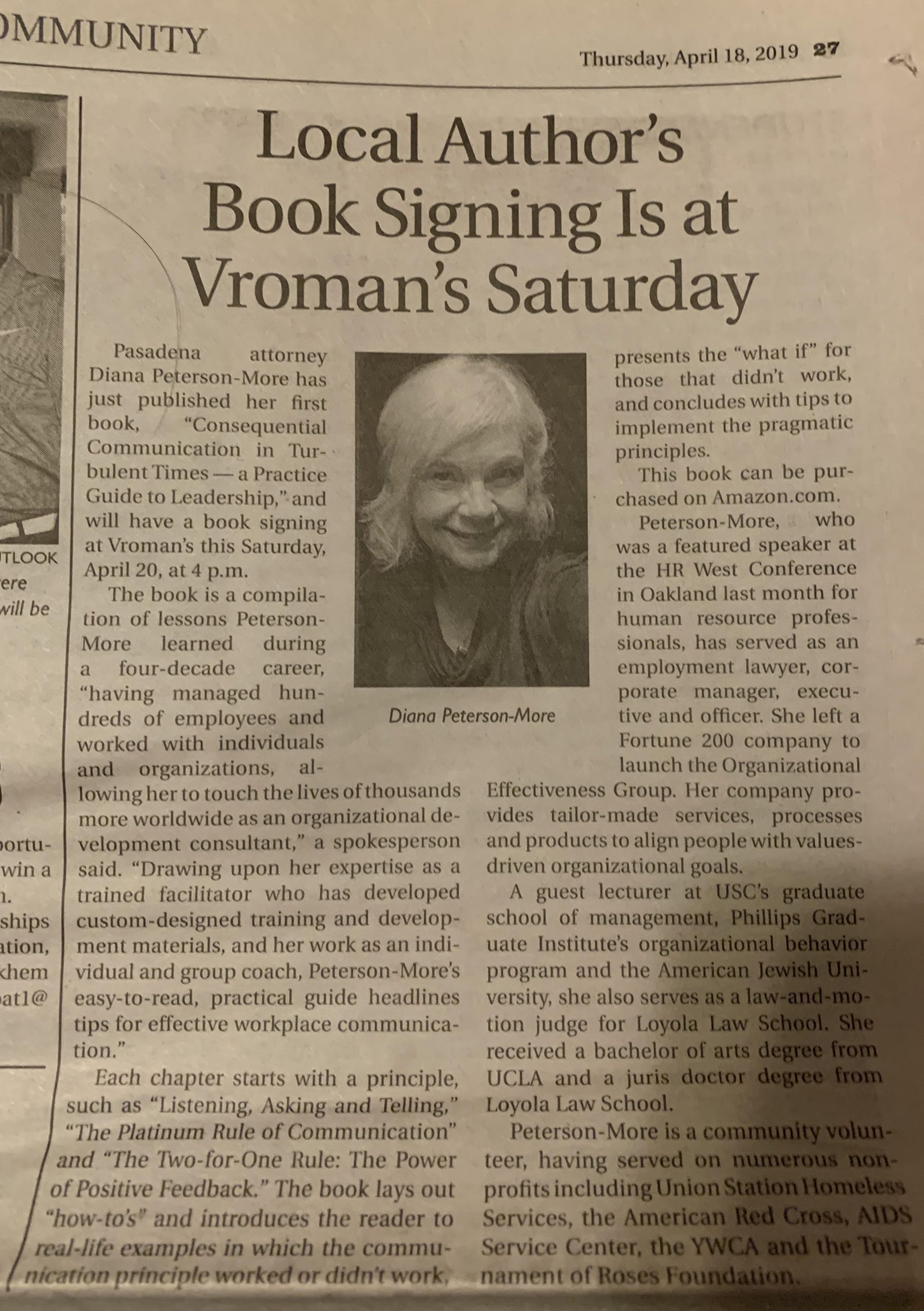